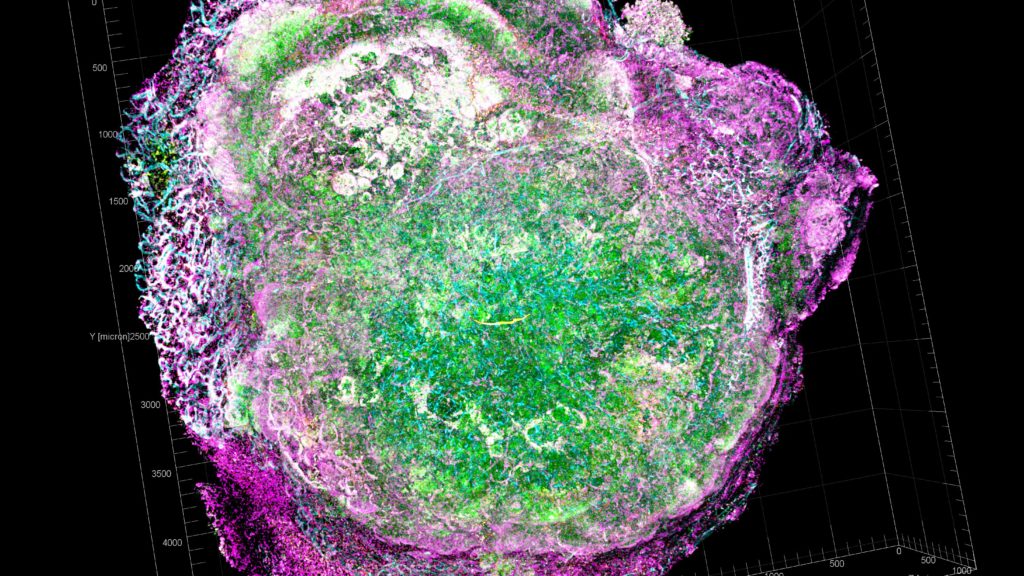 [A breast cancer tumor imaged with a technique that highlights aspects of its microenvironment.
NATIONAL CANCER INSTITUTE/UNIV. OF CHICAGO COMPREHENSIVE CANCER CENTER]I really wish they would stop changing their mind. I know several women who have had chemo before surgery to reduce the size of their tumor. If you have a woman who has a fairly large tumor and chemo before surgery has the benefit of reducing their surgery - maybe from a mastectomy to a lumpectomy. This is actually a huge benefit. The surgery is so much less drastic.

"The main goal of pre-operative (neoadjuvant) chemotherapy for breast cancer is to shrink tumors so women can have a lumpectomy rather than a more invasive mastectomy. It was therefore initially used only on large tumors after being introduced about 25 years ago. But as fewer and fewer women were diagnosed with large breast tumors, pre-op chemo began to be used in patients with smaller cancers, too, in the hope that it would extend survival."

However new research says it isn't a good idea. Nice. How helpful.

"But pre-op chemo can, instead, promote metastasis, scientists concluded from experiments in lab mice and human tissue, published in Science Translational Medicine.

The reason is that standard pre-op chemotherapies for breast cancer — paclitaxel, doxorubicin, and cyclophosphamide — affect the body’s on-ramps to the highways of metastasis, said biologist John Condeelis of Albert Einstein College of Medicine, senior author of the new study.

Called “tumor microenvironments of metastasis,” these on-ramps are sites on blood vessels that special immune cells flock to. If the immune cells hook up with a tumor cell, they usher it into a blood vessel like a Lyft picking up a passenger. Since blood vessels are the highways to distant organs, the result is metastasis, or the spread of cancer to far-flung sites."

Go read the rest of the article here. I am disappointed in this.

Personally, I find this upsetting. It clearly shows a loophole in cancer treatment. What may have been a great idea for many years is being shown potentially as a huge mistake. Yes more research is needed but seriously? Cancer treatment is clearly a crap shoot still.
at July 11, 2017

I am, From Macomb Michigan and am really grateful and thankful for what Dr Melena Anderson has done for me and my family. I Was having HEP B for good three years with no solution, the diseases almost took my life and cause I was unable to work and I was also loosing lots of money for medication, but one faithful day when I went online, I met lots of testimonies about this Dr, so I decided to give it a try and to God be the glory he did it. he cured me of my diseases and am so happy and so pleased to Write about Dr Melena today. if you need his help of you also want to get cured just the way I got mine, He render vaccine for these diseases HIV/AIDS, CANCER, HERPES, ALS e.t.c For more information on how to get cured contact him on his active email: dr.melena.anderson@gmail.com, dr.melena.anderson@aol.com, read more on her blod Blog: http://andersonmelena.blogspot.it/2017/08/hivaids-vaccinecure-2017.html

Do you need cure for HIV/AIDS, CANCER, HERPES, AND OTHER DEADLY disease. I recently got cured from Herpes simplex virus JUST CONTACT Dr Ariba on his email: Contact Call/ WhatsApp +2349034093028 OR EMAIL draribaherbs@gmail.com OR dr.ariba@aol.com