I have no idea why my body has changed so much but it has. And I tend to blame chemo for the changes. Since chemo, I have reactions to tons of things. The list of things I am allergic to has grown immensely. I am even allergic to Benadryl....

I will say its been a very long time since I was stung by a bee. That is approximately 1986 when I stepped on a bee that had come in through the wall of our kitchen in an apartment. I remember it as being extremely painful because there is no flab on your toe to absorb the venom. I ended up calling the pharmacist to ask for options.... But I also remember it going away mostly by the next day.

I was stung one other time that I remember being stung by a bee was as a child....

On Friday I had a bit of an adventure. I was feeling better so I went and poked around in the garden, did some weeding, admired my tiny little green tomatoes, and watered a little bit. My husband had gotten stung by a bee a couple of weeks ago near our rhododendrons out front.

All of a sudden Friday, I got stung twice by bees and started running to the front door as I got stung two more times. I got stung one last time at the front door. I have I think a total of six stings: left elbow, left knee cap, left lower calf, behind my right knee, right upper calf and right ankle. As it has been so long since I was last stung, I waited a little bit to make sure I was feeling okay and wasn't having a severe reaction. That's a lot of stings.

Now it is almost 72 hours and they itch like mad! I have tried all sorts of things to get them to stop. I did some research and got some spray on anti-histamine 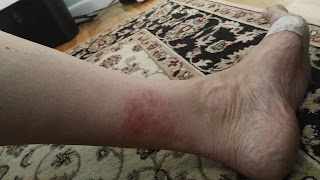 That's the bite on my lower left calf. Look how big it is. Some of the other's are even bigger. My research told me this: