A few weeks ago I went to a conference and Dr Susan Love spoke about the latest in cancer treatment and research. One area she talked about, that I didn't explain well in my other post, was that one area of research is to look at what is in a cell's neighborhood that causes it to turn cancerous. The theory is, according to my tiny, non medical brain, that there must be something about the area a tumor is in that allowed it to grow instead of just remain a bunch of normal cells.

This picture explains it in better detail (and its prettier than a lot more text): 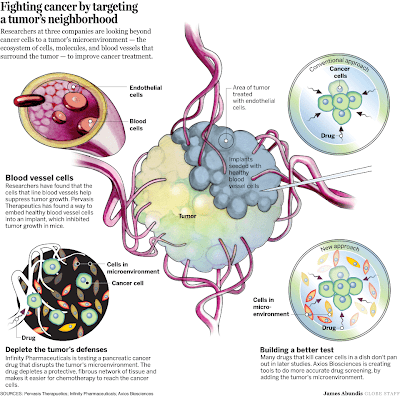 Also as part of the conference one of the doctors, who is head of the radiation oncology department, spoke about how important it is to treat not just the area of the tumor but a centimeter or so around it, but not much more than that. Treatment is becoming much more targeted.

I look forward to future research that expands on this new knowledge. Cancer research has been going for a long time but this is now looking like a new direction which might be promising. But I am getting kind of sick of waiting...
at November 14, 2011

I saw this article too. It does give me hope. And I know what you mean about getting tired of waiting. Thanks for sharing the info.