What Do You Do When You Don't Feel Well?

I guess on the short term when I don't feel well I stay in bed or on the couch. I sit around doing a lot of nothing. And eat and drink what I want. Or what I feel will make me feel better...

If I don't feel better I call my doctor eventually... If I think its that important. I hate calling the doctor. I will not go to the ER unless I am (literally) dripping blood.

I often pretend I am feeling well when I may not be. Because if I didn't do that I would spend entirely too much time sitting around.

But today I am not feeling that bad. Even though I painted part of the living room yesterday. I mean I am tired and soon I will get my act together and take a shower and get dressed. I have nothing on my calendar until 1 pm today. So I can be lazy for a bit. 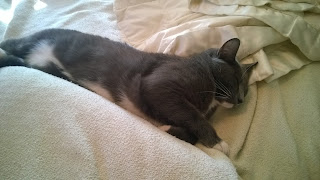 He went out Tuesday night (to my displeasure). He did not appear until yesterday late afternoon. He came out and walked around a little bit and went back to sleep near the foundation of the house. I went inside and made him a quiet little space with his food dish, water bowl, litter box, and favorite pillows. Under protest, I brought him in and put him in there. He immediately jumped up on the table so I put his pillows there. He stayed there for a few hours and used his litter box. Then he came back out to the living room and slept on the sofa for a while.

This morning he was sleeping downstairs on the futon. I brought him some water which he didn't appreciate. He did come upstairs to eat a little and then has been sleeping again. He doesn't want attention. He protests when I pat him. He insisted on going back out - I hoped he was going to be a bit more energetic but he's not. He sitting back by the foundation again.

Damn. I think he needs to go to the vet. But at least its not me going to the doctor. He clearly is not feeling well.
at July 21, 2016

hope he feels better and so do you!

Greatest thanks to Dr Oyagu for his herbal drugs that he prepared for me and when i start using it in just 2weeks i was completely cured and that ended my HERPES SIMPLEX 1&2 DISEASE i am so happy and grateful to Dr Oyagu . after reading about him on a testimony of Jason Cash on a blogger. i knew suddenly Dr Oyagu was the right Doctor to cure my HERPES SIMPLEX 1&2 DISEASE. i discuss with Dr Oyagu and he prepared a herbal medicine for me and when it got sent to me in south korean . i used the herbal medicine and 2weeks and i went to check up again. after 15years of suffering from HERPES SIMPLEX 1&2 at last i am smiling once again. Dr Oyagu also has remedy to others disease like COLD SORES,HIV/AIDS,DIABETES.CANCER,HIGH BLOOD PRESSURE AND MANY MORE. I oblige everyone to contact this powerful herbalist Dr Oyagu and be free from your suffering. contact his WhatsApp line:+2348101755322 or his Email:Oyaguspellcaster@gmail.com