It was our anniversary - marriage, not cancer - so we went away for a long weekend to the beach. In Maine. In April. It was 70 something degrees on Saturday - which is a heat wave there. (One of the weather people on TV said it took him a while to adjust to 80 degrees.) The hotel filled up overnight as a result. This is where we were: 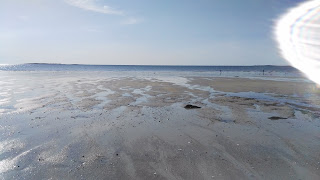 We really needed a few days off to ourselves. Honestly I think its important to spend time together as a couple without distractions. For a good relationship, you need to work on it. You can't expect a happy relationship if you ignore it. We have another trip planned in about three months to keep spending time together.

What did we do? Walk on the beach every day. At least a couple of times, except for this morning when it was 43 degrees and the wind was blowing directly on shore from the 38 degree ocean water so it was freezing cold.

We also explored Portland Maine which is a nice city, ate out, played skee ball and air hockey in an arcade.

Basically I pretended I was a healthy person and enjoyed the outdoors. I may pay the price for this for a few days but I really needed to pretend I could be normal. But I also took a three hour nap the other day which helps me immensely.

Email ThisBlogThis!Share to TwitterShare to FacebookShare to Pinterest
Labels: beach, being healthy

ALL THANKS TO DR OSO WITH HIS HERBAL PORTION I WAS COMPLETELY CURED FROM BREAST CANCER.
I'm here again to appreciate. DR OSO God will always continue to bless you more abundantly, for the good works you don in my life, I will always keep on writing good and posting my testimonies about you on the Internet, I’m MARY JOHNSON from TEXAS . I was tested breast cancer positive, I saw a blog on how DR OSO cured people with his herbal portion, i did not believe in natural medicine but i just decided to give him a try, I contacted him,and explain my situation to him,few day later he sent me the herb, after taking DR OSO  herbal medicine for few weeks i went to hospital for check up so luckily i was healed  with his herbal portion, i am so happy. If you have any type of cancer problem or you are also infected with any kind of disease, contact him drosohaberhome@gmail.com or call/whatapp +2348162084839 for advice and for his product,i hope this testimony also help some one out there ..
here is the  dr website. https://sites.google.com/view/drosohaberhome/
His blog page https://drosohaberhome.blogspot.com
you can also email me for more info about DR oso  via maryjohnson9700@gmail.com     ALL THANK TO DR OSO .