Yesterday I found a stupid list of a series of doctor office signs. Of course I had to read it because the first one caught my eye, and share it on Facebook (because I have nothing better to do).

Last night we went out to dinner. For some reason the kitchen was backed up and we were sitting in uncomfortable chairs for 45 long minutes between when our appetizer and salads were finished and our entrees arrived. During that time, my back started hurting to the extent that I could barely walk. 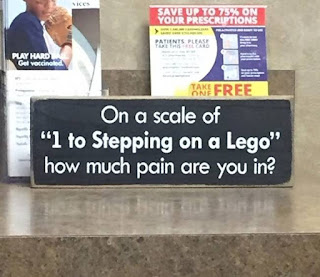 Personally I believe this is a much better scale than the basic 1-10. Who can define what is a ten pain? That little frowny face doesn't quite do it for me. Nor do some of the others I have seen. I know I have blogged about this pain scale thing before but I am too lazy to find them (because my back hurt so I didn't sleep that well). (I have rights too!)

I have a goal today. I will take my nieces and nephews to the beach so I can float around so my back will hurt less. And I will take my good drugs.... with a Tylenol Arthritis (an amazing OTC) to help get it back in line.

Cured of TNBC!
I want to take this time out as a cancer survivor to encourage women out there still suffering from this with my story on how i got a cure. The sad news about it is that i was diagnosed on my 36th birthday in 2008 and with stage 3 TNBC which after i made research was a very aggressive form of cancer at that point i decided and told myself i was going to die and that the end has finally come. All my life i never thought of having breast cancer because i was very active and i worked out at the gym several times every week and my diet was okay. In my search for a cure after 6 years of diagnosis and even after chemo which i did twice spending thousands of dollars but to no avail, until a church member told me all about Dr Aleta a herbal doctor that specializes in treating TNBC, who could help me with a permanent cure, i doubted this at first but i later gave it a try following her methods and instructions. It took 3 months and after it all i felt normal but still went for diagnosis and i was clean today i am proud to say i am a cancer survivor no nodes and i am totally free the new diagnosis confirmed it. Do not die in silence or ignorance because of breast cancer just simply reach her on aletedwin@gmail.com don't be shy just speak to her today.