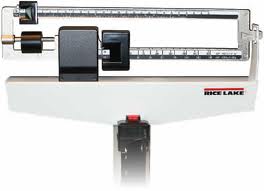 What's the worst thing about any doctor appointment? They weigh you. What's the nastiest machine at the gym? The scale - especially when it goes in the wrong direction. Has any doctor never said 'stop exercising and eating right'? No, never. They always say eat right, get plenty of exercise, and maintain a healthy weight - which to most of us means 'lose weight'. There is a problem between the 'get plenty of exercise' vs the 'maintain a healthy weight'. Muscle is denser than flab.

My husband used to be in the Army Reserves where he had a regular battle with the weight requirements which are based on a version of BMI. Being a heavy boned guy, he was always on the upper end and stressed. But the military requires physically fit soldiers so he would continually fight his own battle of the bulge. Someone at one point had pointed out that entire NFL teams, while being very fit, would not make the military requirements either.

Now at the Olympics some are calling the women athletes fat. Look at Misty May Treanor of beach volleyball fame. I looked up  her BMI. She's at 23.4 which is topping out the normal range. Does she look fat? No! She looks amazingly fit and on the edge of skinny. Some of the teams are calling the one's who beat them fat. Hello! You need many muscles to be that athletic and they are doing what they need to do to break Olympic and World records.

And why is it the media's business about what people weigh anyway? And why is it such a societal issue that women are supposed to be a size 4? Name calling never got anyone anywhere.

And now ANOTHER reason why I really REALLY am so glad we connected. I have PLENTY to say about the weight thing, too. And again... just like the ribbon... it's always the women upon whom the light is shined. It's time. We are NOT a special interest group. We are the majority in this country. I'm ready to call out anyone who wants to turn us into a "for profit brand" and I'm also ready to stand firmly against those who perpetrate the "Am I Thin Enough" culture, too.