When will this end?

We have reached a new low in pinkification. Yes, nothing lower than this ever before. 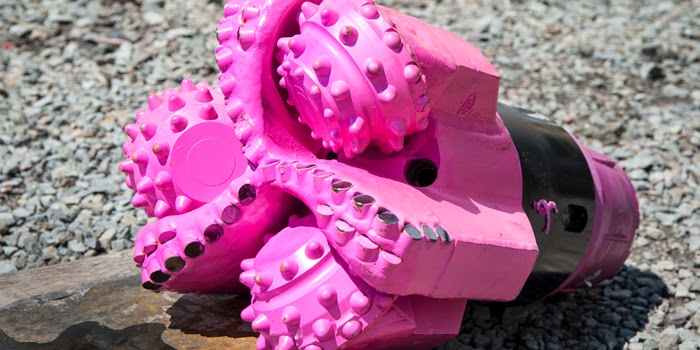 Do you know what this is? Its an underground drill bit (hand) painted pink to help raise breast cancer awareness. These tiny little drill bits, 85-260 lbs each, are used in oil drilling. The company, Baker Hughes, has partnered with the Komen Foundation (for the Cure) to help do their 'bit' for the cause. They are aiming at the roughnecks on the oil platforms who might not yet be aware of breast cancer and will ship each bit with literature on breast health facts in pink topped boxes.

For some reason, I think this a horribly misguided attempt to waste money on breast cancer awareness. I am sure that the workers on the offshore drilling platforms are no less aware of breast cancer than the rest of the American population so I do not think there is a need for them to be 'made aware' any more than anyone else. Any drill bit is going to be instantly covered in dirt, the paint scraped off through its use, and the paint is a completely wasted effort. And aren't the drilling companies producing and using chemicals that are known carcinogens?

"But drill bits are used, of course, to drill oil and natural gas wells, some of which are later exploited using hydraulic fracturing, or fracking. We don’t know a lot about the health risks of fracking, owing to drillers’ and regulators’ drill first, ask questions later strategy, and because the industry, in many cases, protects the precise mix of chemicals used as a “trade secret.” (Baker Hughes announced last week that it will begin disclosing all of the chemicals used in its fracking operations.) Of the 190-some chemicals commonly used by the industry, we’re lacking publicly available information about the safety of about a third of them. And in August, a federal study tested urine samples in workers who monitor fracking flowback, and found that some had been exposed to “higher than recommended” levels of benzene, a known carcinogen."