I think everyone who has ever had a surgical drain can only think about them with a shudder because they are so awful. I hated mine. It was awful. And full of really nasty looking stuff. When they took it out, it hurt so much that the surgeon even apologized several times after.

We have two cats. Boots is the good cat. He likes to cuddle. He likes to have his ears scratched. He likes to sleep on me at night. He wants attention. He is very nice. 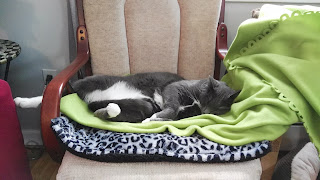 Then there is ZDpot a/k/a Evil Kitty. Why do we call him Evil Kitty (or EK for short)? Because he is the food stealer, fight starter, etc. And he basically does what he damn well pleases - he refuses to listen to reason. 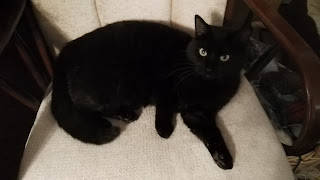 Evil Kitty got out this week. Well he is an outdoor cat and he failed to come home at night, which is not that unusual. What is unusual is that he failed to come home for breakfast - this is the cat who never passes up food. I was worried. I asked the neighbors. He finally wandered in 48 hours later. With a big gash on his right hip. And some other wear and tear. I took him to the vet. They were even impressed with the size of his gash. He is having surgery this afternoon. He will probably get a surgical drain, and a collar of shame.

This will be so much fun. He is not the most cooperative cat in the world. I cannot see how he will deal with a surgical drain. This is not going to be fun. I am sure it will be even less fun than the surgical drain I had.
at July 28, 2017