Surgery number nine was yesterday. I thought the surgeon was going to clean out my knee arthroscopically so it would no longer catch and lock up. That was a good idea.

Everything went as planned - including me being STARVING by the time we got there at 1pm after not eating since the night before - until I woke up after surgery. That's when I found out the bad news.

Well its a good news/bad news situation. The good news is that the surgeon fixed my knee so it will no longer catch - which is amazingly painful when it happens. The bad news is the repair is more complicated than the original plan. Instead of a clean out, he repaired my meniscus. This surgery is not usually done on people over 25 but I think since the tear was where it was repair was better than removal. However, recovery is four to five MONTHS instead of four to five WEEKS. A 'minor' difference.

And I have a giant brace I need to keep on all the time except when showering (and I can't shower until tomorrow). This brace is so big it doesn't tighten up around my leg except near my knee. And, and, and, and, and, and,..... 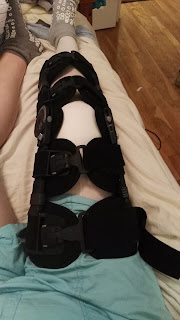 This isn't the best picture but I took it lying in bed with my leg out straight in front of me. You will notice the TED stocking I am supposed to wear every day as well. Its still drying from when I washed it last night. It might take a few more hours to dry.

I will say this is the first surgery that I woke up to a 'surprise' since Number One in 1981 where it turned out it wasn't a 'goiter' and was 'thyroid cancer'. But that doesn't matter. This just sucks.

However, there is plenty of ice cream in my freezer. My husband is home for the next four days straight to take care of me. I can weight bear because of the stupid ass brace and my cane so I can get around pretty easily on the one floor of our house. The cat even slept on my knee last night (as he likes too) which was okay because of the brace so he didn't squish me.

Can you hear me being grumpy already? I have to double check when I can drive because its my right knee. And the pain level is fine. I already have pain meds and can take them when I want but I only needed one last night and am okay so far today. I think I need to get more ice to put on my knee. Crabbiness may prevail for the next few days.
at October 06, 2017