You can lead a horse to water, but you can't make him drink 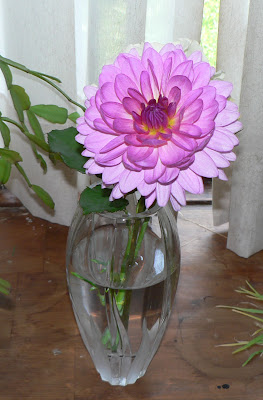 No we don't have a horse. We have a cat. A large cat at that. A cat who seems to think that only I can feed him. This morning, he came up to visit us about 4 am to tell us about his food dish. We ignored him until it was time to get up. Walter went downstairs first (to check the mousetrap) and bring coffee. He forgot to feed the cat who followed him downstairs. So the cat came back up and sat on me (with his delicate 16 lbs). Then Walter came back up and got dressed and went back downstairs expressly to feed the cat. The cat wouldn't go. Walter even stood at the bottom of the stairs and opened the can. I carried the cat to the top of the stairs and he wouldn't budge even though he was looking at the open can in Walter's hand. I walked down stairs with him and over to his food dish. He followed me half way and stopped so I went back and got him and plunked him down in front of his food. Holy moley! There was food! He started eating like he was starving to death. (He had dry food the whole time. He's just picky.) Now that strenuous exercise is over for the day. Both my ankle and back hurt - thank you very much kitty.

Yes, we have a mousetrap because apparently we have a mouse. This means that Walter has cleaned the kitchen and put all the canisters on the top shelf (where he can reach them). Apparently mice might chew their way through glass and get to the flour, etc. But the kitchen is clean and I didn't have to do it so I shouldn't complain. I hate having a mouse in the kitchen... And you would think the cat would do something about this but no he doesn't. But to be fair the mouse now stays on the counters instead of the floor which are heavily cat patrolled. 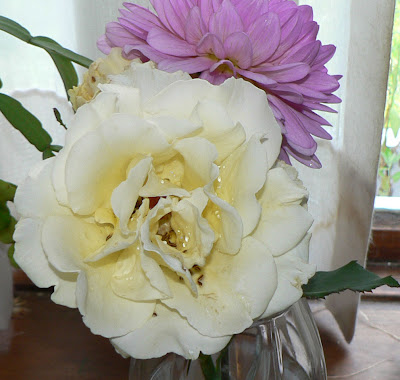 These are flowers from my garden. My rose bush, which I bought when we first moved in and usually on provides a couple of blooms has probably a dozen flowers on it now. My dahlias are also starting, they are a little late this year. My tomatoes are done. They had a tough summer. But my eggplant is finally blooming, will I get any? It may be too late.

Enough about flora and fauna. I spent the weekend doing nothing because my husband thoughtfully shared his cold with me. He took Wednesday and Thursday off from work and then came home early on Friday. I started to feel sick on Friday afternoon while driving home from the Registry where I renewed my license (and dealt with a man who did not have a personality or a sense or humor). I have been feeling awful since then.

On Saturday it became clear I would have to resort to medication to feel better. I usually just take tylenol or something and keep going. There are many things I cannot take these days including a lot of over the counter medications. Thyroid medicine interacts with many decongestants - read the labels for ones that say 'if you have thyroid disease, don't take this' and you will realize how few there are. Then I am allergic to Benadryl - yes that is the drug they give you for allergies - or something in it, its full of anti-histamines. And I am already on anti-inflammatories for my back and pain meds. So I actually called the pharmacist and asked what I could take (Aleve-D) and sent Walter off to the store. But I made a mistake. If you have a 12 hour timed release medication, don't take the first one at 1pm because the next one is due at 1AM... I woke up in the middle of the night and took the 1am dose and said I'm not going to keep doing this. Yesterday I waited until 6pm to take the 1 pm dose and now I am on the 6 and 6 schedule which is much more user friendly.

I didn't do completely nothing all weekend. I lounged around, with the cat, playing on the internet, made a big pot of soup, and planned our vacation which starts in 11 days. I do feel better this morning and will go to work. But its the nearby work so I can come home in ten minutes if I feel crappy. (Or crappier than I feel now.)
at August 31, 2009