Let's go back to the 'why me' conversation for a minute

At some point along the denial slope of coping with your diagnosis, you sit there and ponder 'why me'? Why did I get this ailment?

We learn through this article that it can have something to do with where you  live. Look at this lovely map showing rates of breast cancer diagnosis per 100,000 women: 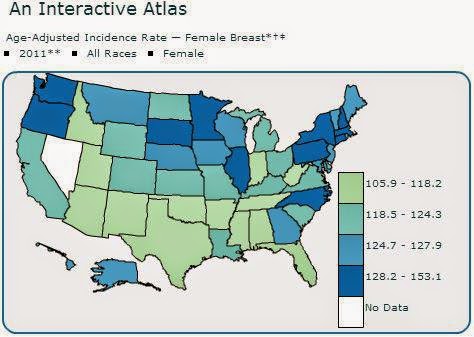 And which are the top states with the highest rates of breast cancer?
I feel so lucky that I  live in Massachusetts with the second highest rate. But wait, I already have it so I don't have to worry. Unless we are talkingal recurrences.

As the article's author writes:

"There's not too much in common with these states other than the fact that they're in the upper half of the country (from a geographic standpoint), which leads me to one of my key points about breast cancer: Researchers aren't exactly sure why some women get breast cancer and others don't. Don't get me wrong; doctors do have a general idea about some of the primary risk factors for breast cancer, which include age, genetics, whether or not a patient is a smoker and/or is overweight, and even whether or not hormone replacement therapy was previously used. But, the fact remains that there's no certainty in determining whether or not one woman will get breast cancer and another one won't."

But maybe we can say the Bible Belt and the Mormons drink less than the rest of the country so maybe they have a reduced risk factor which helps keep their breast cancer rates down. But its all conjecture on my part because it hasn't been figured out.

So if we go back to the original 'why me' question, all we can say is there are still no answers. Crap. It is just a crapshoot.
at September 22, 2014