After hearing about Michael Jackson, Farrah Fawcett, Ed McMahon, and now Billy Mays all dying. But they are all leaving us with something. Michael, Farrah, and Ed had great careers and leave behind memories in the entertainment world. Then Billy Mays will be forever engraved in our brains as the man who shouted from our TV sets that we need to buy more of the 'as seen on TV' miracle product. We will remember them.

Recently in the Boston globe it was reported that during demolition of a wall in the Museum of Fine Arts, they found a letter from 1926 written by one of the workers who built the wall originally. It gives great insight into the life of the workers. I find it intriguing. Here is a man who simply typed a letter and left it behind. Over 80 years later it reappears and now he will be recorded in history. 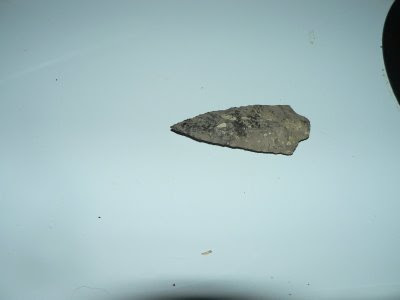 A few years ago, I found an arrow head while digging in my garden. I like to think that some long ago Indian tribe left it but realize it could be from children playing cowboys and Indians back when this was all a wooded lot in the 1950's. I guess I have a romanticized view of the world.

But now the question comes, what do I want to do to be remembered by or for. I don't have any desire to go back and climb the corporate ladder. Nor am I going to do something like fly a balloon around the world a la Steven Fossett. Perhaps I will make my mark otherwise. I think this is a work in progress. Give me another 30 years and I am sure I will come up with something.

In the meantime, I am now late for work. Too much time on the internet. Also time wasted retrieving the cat from the front yard in the rain and he was mad he got all wet - then why did you go out there you silly cat???
at June 29, 2009